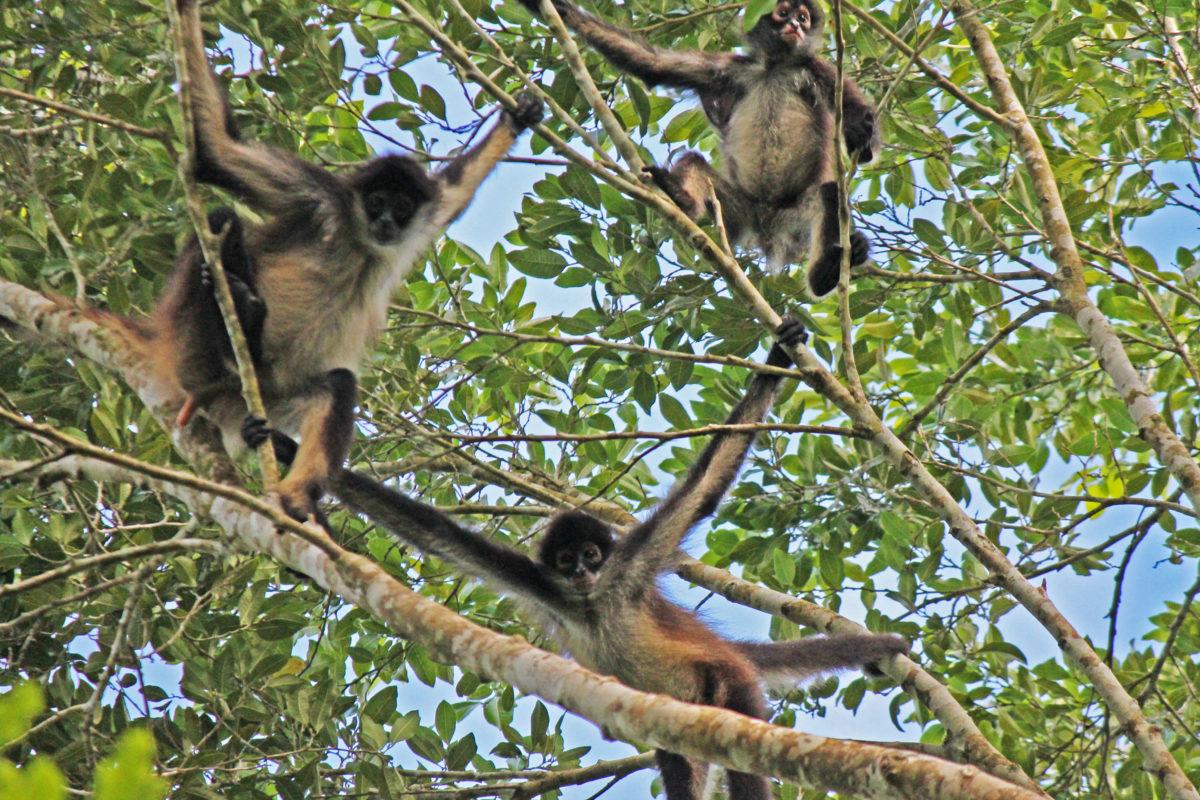 Disclaimer: This page may contain affiliate links. If you make a purchase using one of those links, I may earn a commission at zero cost for you. Please see my disclaimer policy here. Boundless Roads is by no means liable for any purchase of tours, tickets, and any other online reservation that are made with any third-party provider.

Punta Laguna in Mexico is a hidden treasure and if you are in the area of Tulum it is worth a visit if you love nature.

It’s home to spider monkeys and many other interesting creatures, a lagoon, and a cenote managed by a local community. Find out more in this post

The first time I went to Punta Laguna was during my second year in Mexico, in 2011, when I was just driving around with my sister and mum who were visiting.

After our tour in Coba, we had decided to explore the nearby area and I had entered this narrow road that seemed to be carved into the jungle, with just enough space for two lanes… and I‘ve never regretted having done so.

We drove through small Mayan settlements or villages, if you like, where tourism had arrived later than in other places and at a much slower pace, but where the locals still knew how to take advantage of it.

Hence the ‘’Mayan ceremony’’ “Mayan market” and so forth; it seems that ’Mayan” is the magic word used to capture the attention of the passers-by, and it probably works.

We had continued until we saw the sign for Punta Laguna, which promised us the chance to see the spider monkey; therefore we had pulled over and decided to take up the adventure.

After being welcomed by the kind custodian of the private reserve, we had decided to take the tour and find out more.

Six years on and here I am, back again, equipped with my reflex camera and a 250 mm zoom, full of hope to capture some great shots of those funny animals.

I remember the guide had told us that the best time to see them was after 3 pm because they normally travel around the area and tend to come back “home” for food in the late afternoon, so it was a perfect fit for my tour and a great way to end my day.

After paying and gearing up with long pants and hiking boots I met my guide, José, whom I overwhelmed with thousands of questions.

As we walked, he explained that this land, which was later called Punta Laguna, had been assigned to his father’s family by the government, with the purpose of protecting the environment from ‘’human predators’’ who were killing or hunting animals to sell them abroad.

The guide went on to say that his family had been there for 2 generations. In his humbleness, he had so much pride in explaining that his dad and uncle had been the first to arrive there and had worked on extracting gum from the gum trees and that when that business had come to an end, they had started to take care of the area.

In 1994, they had begun monitoring the wildlife behavior and preserving the environment, until 2000, when it was officially declared a protected natural reserve by the government.

There are about 35 families living and working there or in the nearby fields. They know every inch of this land, which at one time, he explained, had been much less friendly when it was thicker and wilder.

The name of the cooperative is Najil Tucha, and the revenue from tourism is divided between the families.

As we talked we started walking into the deep vegetation, and I tried to keep myself from asking too many questions since I didn’t want the noise to disturb the monkeys and scare them away.

We did spot quite a few, and even some with little ones; they were very cute and daring enough to stop and pose, just as if they knew we were harmless.

“They are accustomed to people,” explained José.

José proved himself to be a very knowledgeable guide, and when I mentioned this he said that all the guides assigned to the area are prepared to give all this information, and answer any kind of related questions.

Among the huge variety of trees, the gum tree is quite common, and I learned that chicle (chewing gum in Spanish) is derived from the Mayan words chi (mouth) cle (movement).

Amazing! They actually speak Mayan when they talk to each other and I find it fascinating that such an old language is still alive and very proudly in use.

With regard to the monkeys I learned that here in Punta laguna reserve there are about 500 individual creatures in the reserve, and being very territorial animals, each family has its own space and may fight each other if one steps into another’s territory; and they can move fast, according to José, covering some 2 km in 30 minutes.

On the contrary, the howler monkeys, another species that also live in those territories, are more difficult to see, as they hide within the wildest and less trodden areas, where they can remain for up to 2 days without needing to move.

Also, they eat tender leaves which are easy to find anywhere.

He explained that in the area all the way round to the other side of the lagoon, where there is no path, you can find also jaguars, but that he has never seen one, except on the video cameras they have positioned at certain strategic points, in order to observe and study the animals’ behavior.

On our way back we also saw some funny, huge worm-like green creatures grouped together and hanging tightly to a branch of a tree. Future butterflies, Jose explained. How amazing it would be to watch them until they hatch, I thought.

I love being in nature, it is so regenerating and makes you think about just how perfect it is.

We then moved along to the lagoon, so flat and peaceful, despite the presence of a family with kids, playing and swimming in the water.

They actually organize a boat tour around the lagoon at this point, using small canoe-like boats. He then took me to see the cenote where he explained; they had found 135 skulls from the ancient Mayans, proving that they had indeed inhabited the area.

The entrance to the cenote is 11 m deep and very dark; there is a very primitive wooden staircase to climb down and they will secure you with rope and assist you on the way down to the platform, where the width opens out to 25-30 m (which you wouldn´t believe possible after seeing how small the entrance is).

Amazing… I certainly want to go back again and see it. Inside they have artificial light, in order for you to admire the beauty of the cenote.

I love to visit these kinds of places, where nature is so respected and well preserved by local communities. I love the idea of supporting the local economy, which is what sustainable tourism is all about.

Enjoy and let me know how much you like it.

OPENING HOURS: every day 8 to 5

With a minimum of 4 people: 350 MXN per person includes all the tours: guided walk, boat, zip-line, and cenote

If you are very sensitive to mosquito bites or any other insects I would suggest you bring long pants and closed shoes, and a small backpack with a change of clothes for the boat ride; it will definitely be more comfortable for you in the jungle.

I hope you will enjoy this and if you did please feel free to share on your favorite social. Of course, do not hesitate to ask in the comments below should you have any questions! Hello there! This is Isabella, the author of this blog, and a cat lover. I am an Italian expatriate with a Mexican permanent Residence. After 7 years of living in Cancun, I have decided to leave my job and explore my beloved Mexico and the rest of this beautiful world, starting from South America, while sharing my travel stories and offering useful travel tips about traveling as a solo female traveler and digital nomad.

If you are looking for the perfect place where to stay in Holbox, in this complete guide to Isla Holbox hotels you will find my honest reviews on the best ones. 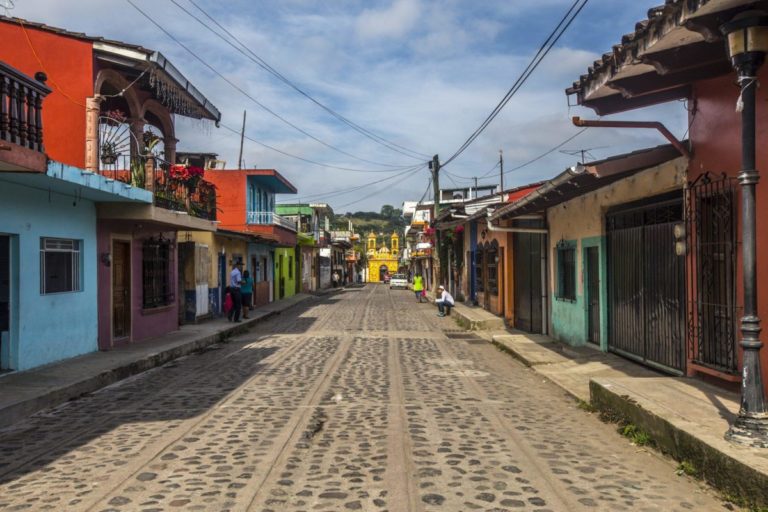 Xico is one of the so called Pueblo Magicos, Magic Towns. I will take you on a one day tour with me and will show you all the beauty I have seen, through my photography and a few words. 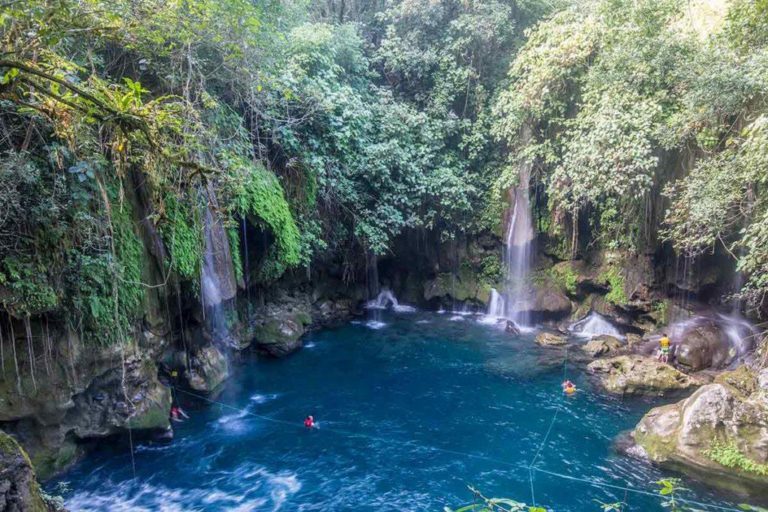 in this post, I have selected the most interesting among la Huasteca Potosina tours that you can join from Ciudad Valles.

There are so many awesome things to do in Baja California Sur that I had to come back twice. Here is what I consider the most exciting activities, plus many practical tips 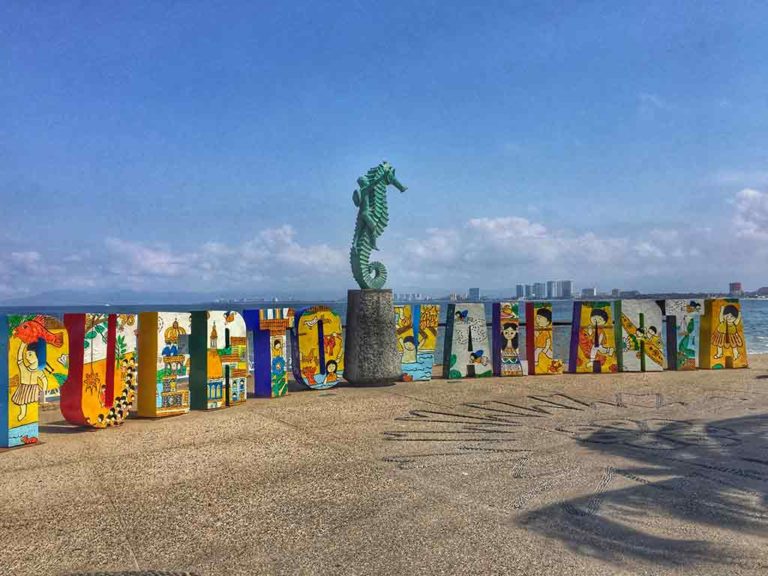 A complete guide to of all the fun things to do in Puerto Vallarta, everything I learned during my 2 months living there while housesitting and working from my laptop. 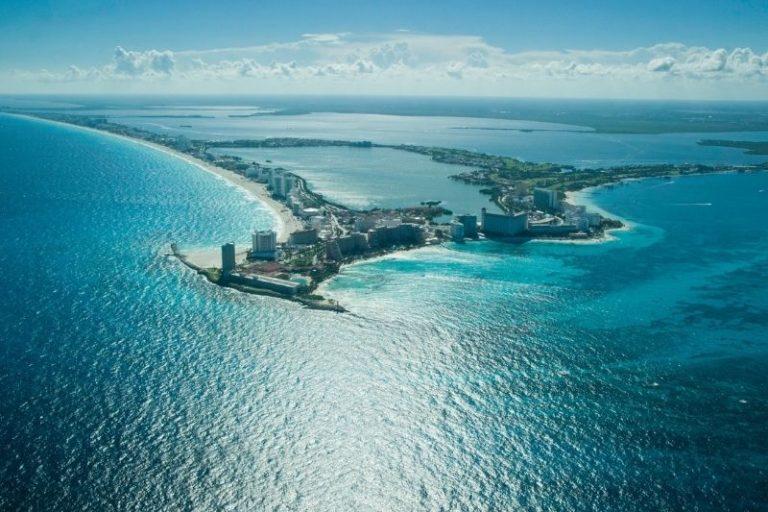 This post on Cancun weather in September includes all the pros and cons of traveling to Cancun in that month, including weather and hotel deals! 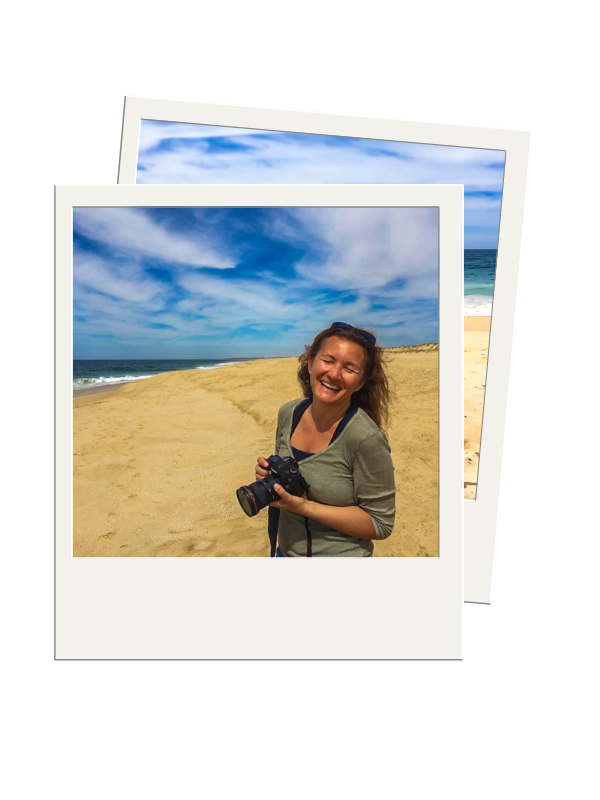 Hey there! This is Isabella, a serious case of wanderlust! Born and raised in Italy, I have been living in many different countries for 4 years and in Mexico for 7 until in 2017 I decided to leave my office job and explore the world, with lots of bags and a camera. I have never looked back ever since. I have no specific travel goals if not just to travel because the journey is my destination. In Boundless Roads I share travel stories and practical information about the places I visit and the nomadic lifestyle. I hope you will join me in this exciting neverending journey that is life.